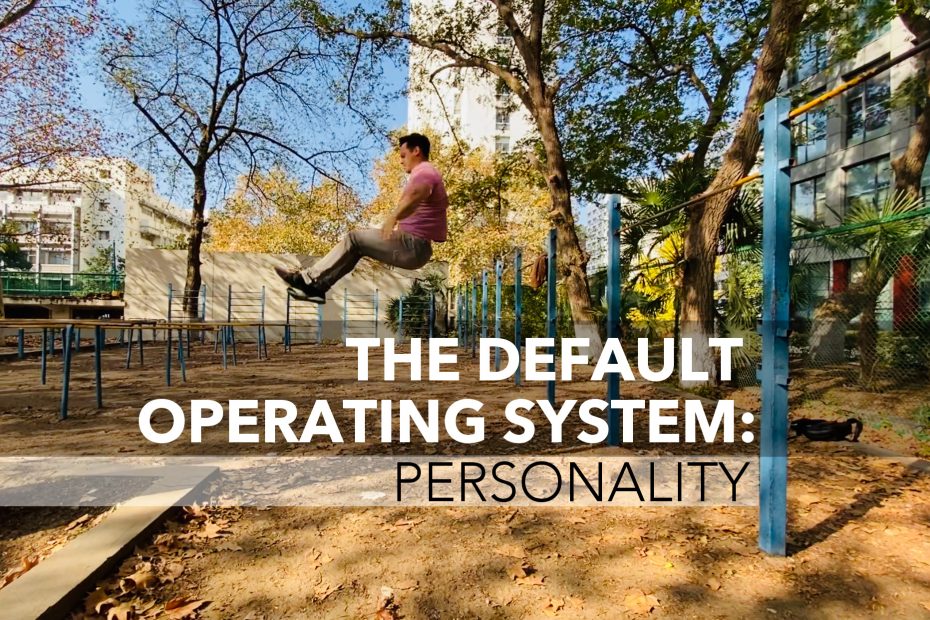 Having boarded the aircraft to behaviour change land in part I, we’ve already caught a bird’s eye view of why behaviour matters, the two broad systems of consciousness involved, and a brief, tentative stab at some of the neuroscience underpinning behaviour.

Before moving forward, it’s worth re-emphasising the thrust of this series on behaviour change. For better or worse, there is an arbitrariness to life: where we are born, the parents we have, our genome, how others might (mis)treat us, whether we develop an autoimmune disease, and so on. Some external factors are plainly outside of our control, and to insist otherwise can cause greater suffering.

Accepting that there are things outside of our control leaves what within the realms of our influence; what we do and how we think. And as we have learnt, what we do shapes our future health and self.

“Humans are producers of their life circumstance, not just products of them.”

So if we are to assign resources to influencing our individual behaviour, we best have an idea of the variables that are involved in the broad term ‘behaviour’. Shelving for now external variables such as public health initiatives, education, environmental factors etc, I propose the following individual variables of behaviour.

It seems to me that these four categories are on a sliding scale of modifiability, with personality as perhaps the most fixed variable, whereas knowledge presets the most readily modifiable variable.

We can likely agree that the inclinations, dispositions, intuitions and ways of seeing that we all have will massively impact our behavioural patterns and choices. This is why personality is important to try to, at least somewhat, understand.

There’s a reason why we all have those moments of ’I can’t believe I’m doing the same thing mum/dad does’.

Personality has a heritability of around 0.4; in other words, around 40% of the variation in our personalities is due to our genetic inheritance from mum and dad, with a variation of around 30-60% largely agreed upon [1]. Either way, it’s a respectable chunk of personality, whilst the rest is largely due to experience and growing up. As with most things in life, there is no binary nature versus nurture; it’s both, simultaneously.

The most widely utilised framework of personality across the psychology literature is the ‘big five’:

Of note, there are ways of getting a measure of your own distribution across the five domains, and I’d recommend Understand Myself.

Why Does Personality Matter?

It turns out that the Big Five isn’t just a horoscope measurement either, rather where we land on the spectrum of these domains can be a pretty big deal.

Take conscientiousness, which is probably the most implicated domain across many life outcomes. Conscientiousness is the trait characterised by diligence, striving, aiming to do well, and industriousness, and it is striking that this directly relates to our mortality.

In a meta-analysis looking at more than 76,000 adults, low conscientiousness was the only trait that reliably predicted people dying earlier [2]. In fact, those in the lowest third for conscientiousness had a 1.52 times, or 37% greater, risk of mortality than those in the upper third. Part of this can be explained by the correlation of conscientiousness to behaviours such as smoking, alcohol, physical activity and so on, but there was still a residual correlation that suggests conscientiousness influences health and mortality via other mechanisms (it’s certainly related to how well one does with career and income across their life, for example)[3].

2. Quality of Life and Health

It’s not just the timing of our mortality that personality can influence [4].

Health related quality of life (HRQoL), taken as an aggregate of psychological well-being, role functioning, social functioning, vitality, physical functioning, bodily pain, general health perceptions, somatic symptoms, and other functioning, is also heavily influence by our personality. Neuroticism describes the amount of anxiety and ‘worry’ that one experiences as a baseline, and scoring higher on this trait, correlates strongly with a significant decreased quality of life.

Lower levels of extraversion, or how outgoing and gregariously inclined one is, also predicts for lower HRQoL; perhaps because greater extraversion is generally associated with more positive affect (mood). Taken as a whole, personality was observed to have an even greater influence on quality of life than factors such as age, income, and even HIV disease stage and CD4 counts (a biological marker used to determine the burden of HIV disease – the lower the CD4 count, the worse the disease).

Alongside this, those more emotionally stable have been found to subjectively experience fewer negative life events, whilst more extraverted individuals report a higher incidence of positive life events [3].

Although our goal content (i.e. the actual thing we may be aiming for) is tightly linked to our values, the process of goal /striving/ (i.e. how effortful and persistent we are in reaching for the goal) is very closely related to our personality. Goal striving is the bridge between goal content and goal achievement. And once again, conscientiousness and emotional stability rank as top trait predictors in this respect. This makes sense. Being more conscientious will bolster the setting of goals, as well as the planning and resource/time management required. Emotional stability enables one to remain unperturbed, self-confident and well-adjusted in the face of any setbacks, fears or failures. To be clear, in a large meta-analysis looking at this, none of the other traits have demonstrated any link with goal striving [1].

So, personality has a large inherited component, and has a significant impact upon risk of death, health related quality of life, and the degree to which we strive for things that matter to us.

By now, those of us low in conscientiousness, extraversion, and highly neurotic are beginning to sweat. Remember though, that we can assign around 30-60% of our personality to the arbitrariness (genetics) that I originally mentioned.

So can we influence the other 40-70% of our personality?

In a word, yes. But first, we should touch on something.

Mr Benn – the most personality-promiscuous man on kids TV

The State versus Trait Problem

The tricky issue in knowing whether or not attempts to elicit personality change actually work is the state versus trait problem. A change in someone’s emotional stability, for example, may just be a transient state change, pertaining only to that context and time, and any change may evaporate shortly after an intervention. For a trait shift, the change needs to be persistent across time and under different circumstances. That state and trait changes likely overlap and co-exist makes it all the more complex. The best we can do is to use time as the great decider, and so longer follow up time after interventions is the main way to see if a change is more trait than state.

Therefore, what follows is a reflection, as best as possible, at trait change approaches.

1. Personality Change Across the Lifespan

The first thing to point out is that personality does naturally alter over the life course [3, 7]. The most robust changes appear to be when we are younger, and specifically when we enter our first romantic relationship, and the transition period from college to work [8]. Looking further ahead, as we age, we tend to become more emotionally stable, confident, conscientious and agreeable; but the rate of change is extremely modest, and other useful traits such as openness usually decrease. Its worth pointing out that after 30 years old, and even into our much later decades, that we are still susceptible to considerable shifts in personality, which shows how ‘plastic’ it is. Either way, when it comes to age-related changes we’re talking decades, which may be little consolation to those of us who wish we were more conscientious, for example.

As is sadly an increasing (but often unnecessary) part of the ageing process for many of us, the accumulation of chronic disease itself can cause deviations in personality, akin to speeding up the age-related negative decline in emotional stability, openness and extraversion by up to 5.5 years quicker than a healthy population [9]. That personality can contribute toward, as well as be altered by, chronic disease is something to consider.

A second, less ideal method for altering personality is by experiencing trauma. After such experience, people may go one of two ways: either remain the same or undergo some kind of transformation. At the risk of over-simplification, that transformation can be broadly be negative or positive. Studies show that significant traumatic events such as a cancer diagnosis, hurricane, or being victim of a crime can potentially alter personality, a process coined ‘post-traumatic growth’. The two major traits that appear to best predict whether an individual will experience post-traumatic growth (versus stress disorder) are extraversion and openness [10]. Some of the processes involved in this kind of growth that researchers highlight involve self-discovery, a new life perspective, a greater focus of self-management and well-being, and re-consideration of relationships and religious/spiritual engagement.

The other potential outcome of trauma, of course, is post-traumatic decline, PTSD, or just continued struggle. This maladaptive response in part occurs when a traumatic experience that has occurred is not allowed to be articulated and expressed, so instead occupies the subconscious and manifests unpredictably in dreams, flashbacks, and disturbed perceptions.

But, if nothing else, my experience working in medicine has so far convinced me that humans are more often extremely resilient and brave in the face of great difficulty. However, I would always push anyone to seek help from friends/family/GP if struggling with mood or thoughts; there is always something that can be done.

Hard conditions of life are indispensable to bringing out the best in human personality.

Next up, one-off, high-dose experiences of psilocybin, or magic mushrooms, can have an immediate and prolonged effect on personality shift, with the most robust domain being trait openness, an effect that was analogous to the result achieved after hundreds of hours of solitary meditation practice [11]. Johns Hopkins University have shown that shifts in openness can persist at follow up more than a year and a half on from a psychedelic experience [12]. This is not a recommendation to pursue this kind of method, as effects can be unpredictable, with numerous episodes of severe, persisting psychosis and psychological disturbance reported from such psychedelic experiences. Nonetheless, under controlled circumstances, in certain populations, it seems that trait openness can be well impacted from this approach.

Leaving aside natural ageing, trauma and magic mushrooms, it does seem that deliberate interventions can nudge personality in more useful directions. We find that things like mindfulness programmes, social skills training for substance abusers, or reasoning skills courses for older adults can have an impact on traits like openness and emotional stability (on the opposite side of the same spectrum as neuroticism). Acknowledging that emotional stability tends to increase by about 1 standard deviation through young adulthood to middle age, a meta-analysis found that interventions of just 4 weeks or longer achieved half that amount of change [13]. This, and other systematic reviews [14] mostly examined interventions on psychopathologies such as anxiety and depression, and concluded that therapy, regardless of type (psychosocial, CBT, pharmacological) could lead to lasting positive personality changes in extraversion and emotional stability.

At this stage, I wish I could give a ‘Step by Step Guide to Personality Change’, but doing so would be quite speculative.

That being said, things that we can take away so far include: